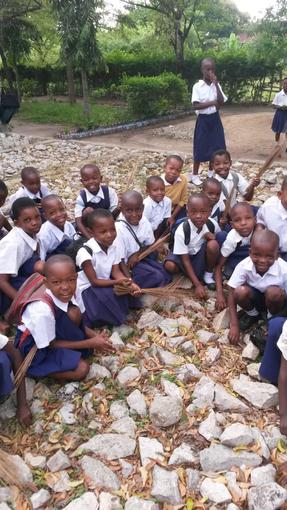 West Malvern Friends of Majani Mapana is a charity set up in 2011 to promote and strengthen the links between St James’ and Majani Mapana primary school in Tanga, Tanzania. Pupils in both schools learn about each other’s culture and their daily, if very different, lives.

Originally a British Council scheme, since 2010 we have organised a one-week exchange for two adults from each school, each year. In addition, our school and wider community were soon keen to support the work of Majani Mapana school in improving the lives of its pupils. In particular we have been focusing on the many disadvantaged children there, often having lost one if not both parents and having to rely on friends and neighbours to get by.

We began by funding a daily meal of hot porridge or ‘ugi’ for these disadvantaged pupils. Teachers have reported that this has the double benefit of not only providing the children with what is often their only meal of the day but also keeps them at school after the break and thus lowers truancy. This quickly led to us fundraising to provide a purpose-built kitchen and storeroom, and we now provide a hot meal for all pupils at school.

We have also helped the school to vastly improve the toilet provision for pupils, and, most recently, in a partnership with Lansdowne Methodist Church, Great Malvern, have facilitated the provision of a rainwater harvesting system. This is used not only for cooking and washing but in particular for watering the now well-established school gardens in which the pupils learn to grow simple crops and sell the surplus in order to buy supplies for the school.

Since 2013 we have also followed the most disadvantaged children on to their respective high schools in Tanga, and their school fees, uniform and equipment are funded by sponsors from the St James’ and West Malvern communities.

Since 2014 we have registered with the Charity Commission and have our registered number 1155388. This also permits us to claim Gift Aid on donations.